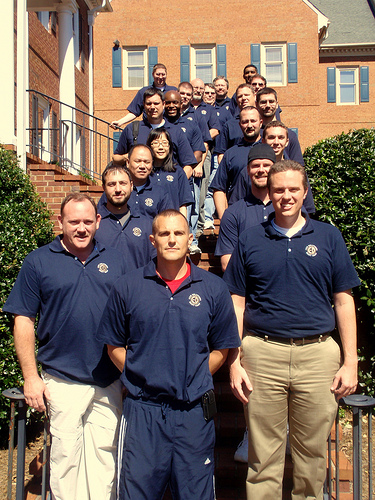 What is it Like to Attend a CED Solutions Boot Camp? So I decided it was time to expand my IT skill set and get some formal Microsoft training (and hopefully a few certifications in the process). I chose to enroll in a CED Solutions MCITP triple certification boot camp held just outside of Atlanta Georgia. I figured that this would be the most time efficient method to obtain multiple certifications. The boot camp consists of an intense 15 days of classroom lecture and hands on labs, combined with 3-5 hours of study time every night. The three MCITP certifications that I am going for are as follows: Enterprise Desktop Administrator 7, Windows Server Administrator, and Windows Enterprise Administrator. In order to obtain all three certifications, a total of 7 exams are required, which will be taken throughout the course of the boot camp.

I arrived in Atlanta on Friday and checked in to my hotel. The weather is about 25 degrees warmer here than at home so that is a bonus! Class is set to begin at 8 am the following Saturday morning. There was a two hour introduction/orientation of how the program works, followed by lunch. After lunch the fun began…

First up is preparation for exam 70-680 Configuring Windows 7. 4 hours of lecture, followed by 4 hours of study time. It was an exciting Saturday night…. Sunday is the light day. Class starts at 12:30pm and ends at 5:00pm. Another 4 hours of group study followed. Monday (first exam day) 6 hours of class time, 1 hour of study time, then test time! I was surprised that the test took less than 30 minutes to complete. There were 50 questions. The minimum score to pass a Microsoft test is 700, 1000 is the highest score possible. Let’s just say that this wasn’t the toughest test that I have ever taken, but I guess it is a good idea to start off easy to build your confidence. This warrants a celebration! A few of us went out for a couple of drinks, before hitting the books again.

With the first test completed it is time to concentrate on the material for exam 70-686 Windows 7 Enterprise Administrator. The material for this exam is quite a bit more difficult. I put in a couple of hours of review before calling it a night. Class for Tuesday and Wednesday are scheduled to be half days. This will allow for plenty of study time to get ready for the next test. I put in 6 hours of study time on Tuesday, and another 2 hours on Wednesday.

I was able to take the 70-686 exam a couple of hours early on Wednesday. I felt very prepared and confident. I am now a MCITP for Windows 7 Enterprise Administration! Two exams down, five more to go!

Now that the desktop OS material is covered, it is time to get into the server side of things. This material is far more difficult and involved. This is the meat and potatoes of the boot camp right here! I put in a couple of hours of study time Wednesday. My brain feels like mush!

Time to start preparing for the 70-640 exam Configuring Active Directory. This consisted of a healthy 9 hours of classroom time followed by 4 hours of studying on both Thursday and Friday. Can you say stressful? I don’t even want to know what my blood pressure is right now… Saturday morning brought a final review; test time is at 2:00pm. Wow, this was one of the most difficult tests I have ever taken. I managed to score an 868 which is well above the minimum passing score of 700! I feel very fortunate, 7 people out of 20 people in our class failed this exam. Time to go out and relieve some stress! Several of us went out for a night on the town for a well-deserved celebration. Studying this night consisted of Miller Light and Jagermeister!

The 70-642 exam is up next, Configuring a Network Infrastructure. I hope to God that this test is easier than the last one, I don’t know if I can put my brain and body through that amount of stress again! 5 hours of class on Sunday, followed by 3 hours of study time. A brutal 9 hours of class time on Monday followed by 5 hours of studying. Tuesday is test day again. I spent a couple of hours reviewing and preparing in the morning. I was able to test early at 1:15pm. BOOM, I scored a 950! Thankfully this test was easier than the last one. I can now see the light at the end of the tunnel with 4 exams complete, and only 3 more remaining!

Next up is exam 70-646 Windows Server 2008 Administration. I put in a solid 4 hours of study time on Tuesday. Class time for Wednesday was only 6 hours, so I was able to get an early start on 4 more hours of studying for the exam…. Thursday is a half day of class, followed by a final review, and then the test. The format of this exam is different that all of the others so far. You are presented with a fictitious company and are tasked with designing a solution that meets the company’s goals. After these 5 scenarios, I had an additional 22 questions. I scored a 929! Whoohooo, 5th exam passed, I just earned an MCITP for Windows Server Administrator. Only two more exams to go, yea!

No time for a celebration just yet. The two final exams are back to back, starting tomorrow. I have to get ready for exam 70-643 Windows Server 2008 Applications Infrastructure, Configuring next. I put in a brutal 6 hours of study time Thursday night, who needs sleep? Fridays lecture lasted until just past lunch time, which left time for a very short review. I started looking at the practice test and all of the words and terms were starting to blend together, my brain feels like it is starting to shut down! I said screw the review; let me get this damn test over with. To my astonishment I did surprisingly well, I scored a 904! Six exams down, only one more remaining. Time to take a short dinner break before studying for the final exam which is tomorrow.

After a quick dinner, I put in 5 hours of study time on Friday night to prepare for the final test which is exam 70-647 Windows Server 2008, Enterprise Administrator. I woke up Saturday morning feeling both mentally and physically exhausted. As of now I do not feel prepared to take this final exam. The material is very difficult, and my brain is fried. I have time for a couple hours of review before taking the test. After about two and a half hours I couldn’t take any more, at this point I am incapable of absorbing any additional information. I took a short break for lunch, and then it was test time for the final time… This test was very difficult, combined with the fact that I have been going at this for two weeks. When I finished the test, I just sat looking at the monitor with a blank stare on my face waiting for my score to be calculated. At this point, I just want to be finished, I can’t take it any longer, and then the screen lights up “Congratulations you have passed this exam, the minimum score to pass is 700, your score was 718″. Wow, I just barely squeaked by, but none the less I passed!