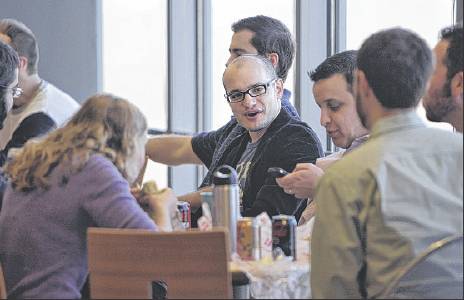 Metro Atlanta positions unfilled due to shortage of qualified workers.

Eric Vintimilla used to be puzzled, too.

Looking at the bountiful help wanted listings at high-technology companies, he wondered, “Why are so many people unemployed out there when there are all these jobs open.”

Then the 31-year-old embarked on his own ultimately successful job search and found out first-hand: Many applicants didn’t have the combination of experience and training that picky employers want.

Those candidates suffer from the so-called “skills gap,” and it’s being blamed for some of the persistent joblessness nationwide.

While it has improved of late, the unemployment rate in Georgia stands at 9.9 percent. Across the United States, it’s 8.5 percent. Meanwhile, job listings in some industries abound, particularly in high tech, with the more highly skilled openings such as software and design positions generally the toughest to fill.

Other sectors have a hard time filling openings, including the medical profession and the skilled trades. But the high-tech sector is regarded as particularly important to the future economic development of metro areas like Atlanta.

“It’s a big issue,” said Tino Mantella, president and CEO of the Technology Association of Georgia.

Mantella said there are near ly 4,400 technology industry job openings in Georgia, with almost all in metro Atlanta — a striking number “in what’s been a tough economy.”

Most in demand: IT architects and consultants; systems engineers; software developers; and IT managers.

In a recent national survey of human resources professionals, 71 percent of high-tech companies reported having a difficult time hiring for certain jobs.

Mark Schmit, vice president for research at the Society for Human Resource Management, which conducted the survey, terms the situation a “paradox” for businesses: “high unemployment and the inability to fill key jobs in their organizations.”

The issue is not only a problem for the unemployed and for companies that must spend more time and money finding candidates, he said. It can also stymie growth at a time when it’s sorely needed.

“If key jobs cannot be filled in organizations, then other less critical jobs requiring less skill cannot be created either because the organization’s growth potential is stunted,” he said. “Thus, the cycle of low or no job growth continues.”

Vintimilla landed a job as a software engineer in November with Atlanta-based software company Pardot.

Pardot has offered a $10,001 bonus to people who refer software engineers to the company who are hired.

Blitzer agrees that the difficulty in hiring stunts a company’s growth.

“If you know you can afford to have 55 people but you can only find 40, then you just can’t take advantage of growth opportunities the same way,” he said. “It absolutely inhibits growth. If you have cash in the bank you want to put it in play.”

Nikki Millis-Stumpf, human resources director at Corfire, an Alpharetta mobile commerce firm, said many of the technologies that new hires are expected to use were only recently developed. So the typical applicant doesn’t have the desired on-the-job experience.

“A lot of people have the aptitude,” she said, “but not necessarily the proven, demonstrable experience.”

Another reason is that there simply aren’t enough qualified applicants to go around, especially with Silicon Valley companies luring prospects to California.

“We’ve had in the last year, in particular, an increase in competition for graduating students and a lot of that is in high-tech areas like computer science,” said Ralph Mob-ley, director of career services at Georgia Tech. “We’re recruited nationally and internationally, not just locally. There is a lot of competition for those skills and I hear it from some local employers. They’re competing against companies from all over.”

Mobley said companies sometimes make the hiring process harder by focusing on very specific experience or skills rather than finding a critical thinker who can adapt as technology evolves.

Improving the flow of qualified candidates is possible, however, said Cedric Stallworth, assistant dean in the College of Computing at Georgia Tech.

Students need to start learning computer problem-solving skills earlier, he said. More internships would help, too, with students learning on the job before graduation. So would training people in multiple areas so they can work in a world that demands multiple skills in an employee.

It’s a tall barrier that applicants for high-tech positions have to hurdle, yet some, like Vintimilla, manage to clear it. He came upon the opening at Pardot while doing software development for a Philadelphia hospital. After two days of intense interviews, he got an offer.

“I literally fit all the needs they had,” he said.