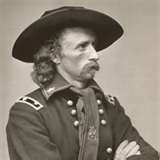 While protecting a railroad survey party in Montana, Custer and his 7th Cavalry clash for the first time with the Sioux Indians, who will defeat them three years later at Little Big Horn. During the previous two years, Lieutenant Colonel George Armstrong Custer and his 7th Cavalry had not fought a single battle against the hostile Indians of the western Plains. Hungry for action, Custer was pleased when the 7th Cavalry was ordered to help protect a party of surveyors laying out the route for the proposed Northern Pacific Railroad. The new transcontinental railroad (the third in the United States) was to pass through territory controlled by hostile Sioux Indians. Custer was optimistic that the assignment would give him a chance to improve his reputation as an Indian fighter. Initially, the military escort saw little action. The hostile Indians seemed to be avoiding or ignoring the survey party. For Custer, the mission turned into something of a lark. He spent much of his time shooting buffalo, antelope, elk, and other animals. To find good hunting, he often led the 7th Cavalry far away from the survey party and the main body of the military escort. On this day in 1873, Custer was far ahead of the rest of the force, camping along the Tongue River in southeastern Montana. Suddenly, a large band of Sioux warriors appeared on the horizon and attacked. The Indians were led by Crazy Horse and Sitting Bull, but the young braves seemed to have attacked impetuously and with little planning. Custer, who had been taking an afternoon nap, reacted quickly and mounted an effective defense. After a brief skirmish, the Indians withdrew. Since only one soldier and one Indian were killed in the skirmish, Custer’s short battle along the Tongue River seemed relatively insignificant at the time. However, Custer’s easy escape in his first encounter with Sitting Bull and Crazy Horse may have given him a dangerously scornful view of their fighting abilities. It helped to confirm his belief that the Plains warriors tended to flee rather than fight. As a result, when Custer again encountered Sitting Bull and Crazy Horse at the Little Big Horn River three years later, his greatest fear was that they would withdraw before he could attack, and he rushed in without proper reconnaissance. That time, though, the Indians stood and fought, leaving Custer and more than 200 of his men dead.