THE STORY OF U.S. MARINES IN THE PACIFIC THEATER OF WORLD WAR II DEBUTS MARCH 14 ON HBO

“It is not a history, and it is not my story alone. I have attempted, rather, to be the spokesman for my comrades, who were swept with me into the abyss of war.” Eugene B. Sledge, With the Old Breed

The epic ten-part miniseries event THE PACIFIC debuts with Part One on SUNDAY, MARCH 14 (9:00-10:00 p.m. ET/PT), followed by other parts debuting on consecutive Sundays at the same time through May 16.

The HBO Miniseries presentation of a Playtone and DreamWorks production is executive produced by Tom Hanks, Steven Spielberg and Gary Goetzman, the producing team behind the Emmy(R) Award-winning and Golden Globe-winning 2001 HBO miniseries “Band of Brothers.” Hanks and Goetzman also executive produced the HBO miniseries “John Adams,” which won a record-breaking 13 Emmys(R) in 2008.

THE PACIFIC tracks the intertwined real-life journeys of three U.S. Marines Robert Leckie (James Badge Dale), Eugene Sledge (Joe Mazzello) and John Basilone (Jon Seda) across the vast canvas of the Pacific Theater during World War II. The miniseries follows these men and their fellow Marines from their first battle with the Japanese on Guadalcanal, through the rain forests of Cape Gloucester and the strongholds of Peleliu, across the bloody sands of Iwo Jima and through the horror of Okinawa, and finally to their triumphant but uneasy return home after V-J Day.

Principal photography for THE PACIFIC was completed on location in Australia’s Far North Queensland and Victoria over a ten-month period beginning in August 2007.

On Dec. 8, 1941, just over 24 hours after the Japanese surprise attack on the U.S. Naval Base at Pearl Harbor, Congress issued a formal declaration of war against the Empire of Japan. For a decade, tensions had been mounting between Japan and the U.S., as the Japanese expanded their conquest of a large region including much of China and Southeast Asia. As a result of the bombing of Pearl Harbor, the United States officially entered World War II, already in its third year of being waged by countries of the Allied powers, including the United Kingdom, the Soviet Union, China, Canada and Australia, against the Axis powers of Japan, Germany and Italy.

Practically overnight, military recruiting offices across the country were jammed, as thousands of Americans rushed to enlist in the armed forces. Many of those young men chose to join the Marine Corps, which saw its ranks more than triple in the six months following Pearl Harbor.

While HBO’s miniseries “Band of Brothers” followed the experiences of one company of Army paratroopers in the European Theater of Operations, THE PACIFIC depicts the war a world away in the Pacific Theater of Operations, which encompassed most of the Pacific Ocean and its islands, including the Philippines, the Netherlands East Indies, New Guinea and the Solomon Islands. This miniseries follows the intersecting odysseys of three men of the 1st Marine Division, an infantry division nicknamed “The Old Breed” for its position as the oldest and largest active duty division of the U.S. Marine Corps. With the support of their fellow Marines and comrades in the Navy, Air Force and Army, the 1st Marine Division was at the forefront of many of hardest-fought campaigns of the Pacific War.

Private First Class (PFC) Robert Leckie (played by James Badge Dale) grew up in Rutherford, NJ, one of eight children. He began a professional sportswriting career for the Bergen Evening Record newspaper at age 16. Leckie, who would be christened “Lucky” by his comrades in arms, was one of those who enlisted in the Marine Corps just after Pearl Harbor. He served with H Company, 2nd Battalion, 1st Marine Regiment, 1st Marine Division as a machine gunner.

Sgt. John Basilone (played by Jon Seda) was raised in Raritan, NJ, one of ten children of Italian immigrant parents. In 1934, at age 18, Basilone enlisted in the U.S. Army and served three years in the Philippines, where he was a champion boxer. After a brief return to New Jersey, Basilone enlisted in the Marine Corps in 1940 and was a machine gunner with C Company, 1st Battalion, 7th Marine Regiment, 1st Marine Division, and later with the B Company, 1st Battalion, 27th Marine Regiment, 5th Marine Division.

Born to a privileged family in Mobile, Ala., PFC Eugene B. Sledge (played by Joe Mazzello) had relatives on both sides of his family who fought for the Confederacy. Sledge was the son of a physician who was a medical officer during the First World War; he had turned 18 just one month before the U.S. entered the war, but a heart condition kept him from enlisting until Dec. 1942. Although his family urged him to train as an officer, Sledge ultimately joined as an enlisted man and served with K Company, 3rd Battalion, 5th Marine Regiment, 1st Marine Division as a mortarman.

Over the span of ten hours, THE PACIFIC takes an unflinching “under the helmet” look at the experiences of these men and their brothers in arms, each of whom finds himself fighting for his life on faraway specks of land they had never heard of Guadalcanal, Cape Gloucester, Peleliu, Iwo Jima, Okinawa. Forced to endure extreme deprivation and a debilitating climate, while fighting a brutal enemy who would rather die than consider surrender, these Marines are driven to the brink of their humanity.

THE PACIFIC depicts these battles physical, mental and emotional as it explores the true human cost of war. 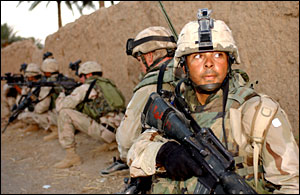