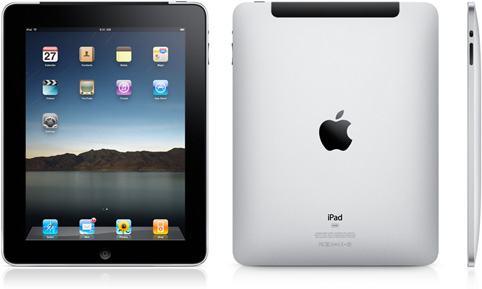 10 Reasons to Wait for the Apple iPad 3G

News Analysis: As Apple prepares for the launch of the iPad on Saturday, it’s important to remember that another launch is on its way. In late April, the iPad 3G will finally hit store shelves. And an objective view of both products says that the latter launch is the one we should all be waiting for.

The Apple iPad is set to hit store shelves this Saturday. Already consumers are getting excited to finally get their hands on the tablet that was thrown around the rumor mill for months before CEO Steve Jobs announced it. Such excitement is understandable. The iPad isn’t just any tablet.

The device is kicking off what could be the next major computing battle between vendors ranging from Asus and HP to Apple and Archos. The future of tablet computing rests in the success or failure of the iPad and its competitors. And the world is watching.

But there’s a certain detail that some folks are forgetting about: The iPad that Apple plans to release on Saturday is WiFi-only. The version boasting 3G connectivity will likely launch toward the end of April. So, for those folks who are looking for a more capable device, more waiting is in order. But should more of us be waiting for the 3G model to hit the market? It might be a good idea. Here’s why:

When the iPhone first launched in 2007, consumers were calling on Apple to bring 3G to the device. They realized that as they moved away from the home, trying to access content on the Web was far more difficult than it needed to be. Applying that same logic, it would seem that 3G is a must-have for any iPad user who intends to travel outside the home. And unlike the original iPhone, a WiFi-only iPad won’t even have access to AT&T’s Edge network. It might be costly, but 3G is a must-have for any mobile computing device.

By waiting for the iPad 3G, consumers give themselves an opportunity to see what kind of mistakes Apple might have made with the iPad’s design. For the most part, both the iPad 3G and the WiFi-only model are identical. If issues arise with the WiFi model in April, consumers can then decide if the device is worth buying. At this point, we just don’t know if the iPad is a viable product. Waiting seems like a better option.

3. Tied to the couch

The WiFi-only iPad is tied to the couch. There’s little debating that Apple plans to make the iPad a mobile computing and entertainment companion. But with the help of 3G, the ability to enjoy entertainment is maximized. Once a WiFi-only model loses its connection to a hot spot, users are forced to only consume content that is stored on the iPad’s hard drive. And with a maximum of 64GB of storage, there isn’t a ton of room to store movies, music and television shows. In many cases, that 3G Web connection will come in handy for folks who want to stream content over the Internet.

4. The price difference isn’t all that bad

Those who decided to purchase the iPad 3G are paying a $130 premium to do so. Yes, it’s expensive, but it’s not so overwhelming that users will need to think twice about picking one up. For an extra $130, consumers can enjoy a far better experience than what they would find in a WiFi-only model. In other words, that $130 goes a long way.

By waiting for the iPad 3G, consumers can also decide if the iPad itself is really right for them. In the coming weeks, iPad competitors will start hitting store shelves. And with a quick trip to Best Buy, consumers can decide if a competing device is something that they would rather have. Those buying an iPad on Saturday won’t have that luxury, since the iPad will be beating much of the competition to the market. But those who decide to wait for the 3G version will have ample time to decide exactly which product they really want to use.

6. Future-proofing
At this point, a WiFi-only option might seem like a fine idea, since most folks plan to use the tablet in their home. But who knows what Apple has planned for the iPad? It’s entirely possible that when the company announces an update to iPhone OS later this year, it will also provide a feature that users would want to access over 3G. Granted, this is all speculation, but when it comes to Apple, it’s better to have the capable model than the hobbled version.

A major sticking point for the iPad 3G is the additional cost of connecting to the Web. Users will be forced to pay $14.99 per month for 250MB of data or $30 per month for unlimited service. But there is one saving grace: Connections to AT&T’s 3G network are ad-hoc, which means users won’t be forced into contracts. At any point, users can elect to buy 3G connectivity or get rid of it without worrying about early termination fees. That alone makes the cost of paying for 3G just a bit more satisfying.

Imagine surfing the Web, streaming content and using apps that require a Web connection. And then, leave the house and try to do the same thing in a car or wherever WiFi isn’t available. Not too good, huh? Once the WiFi-only iPad has no connection to a wireless hot spot, it’s little more than a big iPod. That’s not a good thing. More and more services require a Web connection for users to get the full effect of using them. If they lose that Web connection, they lose usability. That, in turn, causes the iPad to lose its own usability. Remember, WiFi hot spots are not always available.

Although it’s clear that the 3G version is much better for entertainment seekers, it should also attract those who often use applications. An increasing number of apps are requiring a Web connection to run. If a user doesn’t have 3G, those apps will only work when they have access to a WiFi hot spot. That’s not good. Apps should be accessible at any time and work the way users want wherever they are. That is far more likely to happen with the iPad 3G than its WiFi counterpart.

10. It’s probably what Apple wants you to do

Doing what a company wants you to do isn’t always the best practice in the tech industry, but when it comes to the iPad, it just might be. The WiFi-only iPad model seems like an afterthought. It’s as if the version came out of Apple’s desire to not look like it’s forcing people into another monthly fee. But anyone who thinks that Apple doesn’t want the vast majority of buyers to opt for the 3G version is totally wrong. Apple wants to build on the iPad and deliver content and features that will work with Web connectivity. The company can make that transition easier with a 3G-enabled iPad.

Realizing that, it might behoove consumers to go with the iPad 3G. Yes, it’s more expensive, but it’s also Apple’s favorite. Going forward, that favoritism could benefit 3G owners and make WiFi-only owners wish they hadn’t rushed to store shelves.