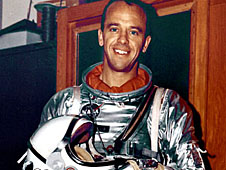 Today in Military History – May 5th -The Whole Story May 5th, 1961 – From Cape Canaveral, Florida, Navy Commander Alan Bartlett Shepard Jr. is launched into space aboard the Freedom 7 space capsule, becoming the first American astronaut to travel into space. The suborbital flight, which lasted 15 minutes and reached a height of 116 miles into the atmosphere, was a major triumph for the National Aeronautics and Space Administration (NASA). NASA was established in 1958 to keep U.S. space efforts abreast of recent Soviet achievements, such as the launching of the world’s first artificial satellite–Sputnik 1–in 1957. In the late 1950s and early 1960s, the two superpowers raced to become the first country to put a man in space and return him to Earth. On April 12, 1961, the Soviet space program won the race when cosmonaut Yuri Gagarin was launched into space, put in orbit around the planet, and safely returned to Earth. One month later, Shepard’s suborbital flight restored faith in the U.S. space program. NASA continued to trail the Soviets closely until the late 1960s and the successes of the Apollo lunar program. In July 1969, the Americans took a giant leap forward with Apollo 11, a three-stage spacecraft that took U.S. astronauts to the surface of the moon and returned them to Earth. On February 5, 1971, Alan Shepard, the first American in space, became the fifth astronaut to walk on the moon as part of the Apollo 14 lunar landing mission.