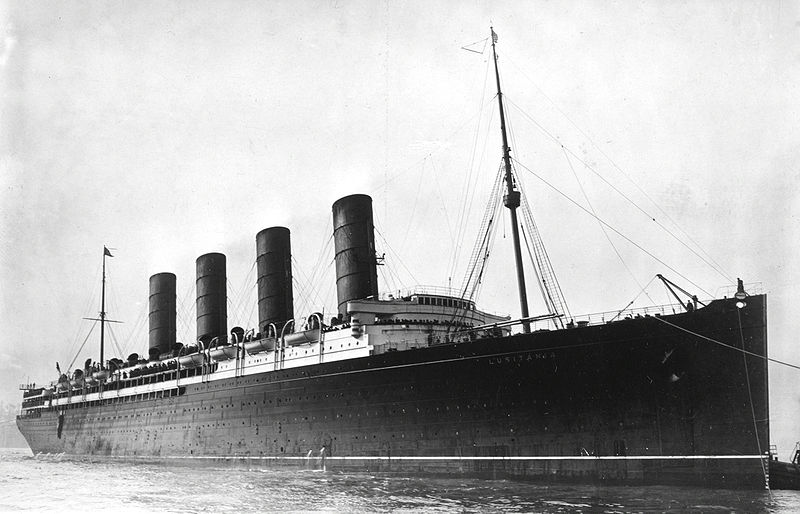 Today in Military History – May 7th – Sinking of Lusitania

RMS Lusitania was an ocean liner owned by the Cunard Line and built by John Brown and Company of Clydebank, Scotland. She was torpedoed by the SM U-20, a German U-boat on 7 May 1915 and sank in eighteen minutes, eight miles (15 km) off the Old Head of Kinsale, Ireland, killing 1,198 of the 1,959 people aboard. The sinking turned public opinion in many countries against Germany, and was instrumental in bringing the United States into World War I.[4] The sinking of the Lusitania caused great controversy, which persists to this day. Lusitania was approximately 30 miles (48 km) from Cape Clear Island when she encountered fog and reduced speed to 18 knots.[24] She was making for the port of Queenstown (now Cobh), Ireland, 70 kilometres (43 mi) from the Old Head of Kinsale when the liner crossed in front of U-20 at 14:10. One story states that when Lieutenant Schwieger of the U-20 gave the order to fire, his quartermaster, Charles Voegele, would not take part in an attack on women and children, and refused to pass on the order to the torpedo room — a decision for which he was court-martialed and served three years in prison at Kiel.[25] From roughly 750 yards, a single torpedo was fired at 14:10 hours. Leslie Morton, an eighteen year old lookout on the bow, spotted thin lines of foam racing toward the ship. “Torpedoes coming on the starboard side!” he shouted through a megaphone, thinking the bubbles came from two projectiles. The torpedo struck Lusitania under the bridge, sending a plume of debris, steel plating and water upward and knocking Lifeboat number five off of its davits. It sounded like a “million ton hammer hitting a steam boiler a hundred feet high,” one passenger said. A second, more powerful explosion followed, sending a geyser of water, coal, and debris high above the deck. Schwieger’s log entries attest that he only launched one torpedo, but some doubt the validity of this claim, contending that the German government subsequently doctored Schwieger’s log,[26] but accounts from other U-20 crew members corroborate it. In Schwieger’s own words, recorded in the log of U-20: Torpedo hits starboard side right behind the bridge. An unusually heavy explosion takes place with a very strong explosive cloud. The explosion of the torpedo must have been followed by a second one [boiler or coal or powder?]… The ship stops immediately and heels over to starboard very quickly, immersing simultaneously at the bow… the name Lusitania becomes visible in golden letters. Lusitania’s wireless operator sent out an immediate SOS and Captain Turner gave the order to abandon ship. Water had flooded the ship’s starboard longitudinal compartments, causing a 15-degree list to starboard. Captain Turner tried turning the ship toward the Irish coast in the hope of beaching her, but the helm would not respond as the torpedo had knocked out the steam lines to the steering motor. Meanwhile, the ship’s propellers continued to drive the ship at 18 knots (33 km/h), forcing more water into her hull. The U-20’s torpedo officer, Raimund Weisbach, also viewed the destruction through the vessel’s periscope and felt the explosion was unusually severe. Within six minutes, Lusitania’s forecastle began to submerge. Lusitania’s severe starboard list complicated the launch of her lifeboats. Ten minutes after the torpedoing, when she had slowed enough to start putting boats in the water the lifeboats on the starboard side swung out too far to step aboard safely.[28] While it was still possible to board the lifeboats on the port side, lowering them presented a different problem. As was typical for the period, the hull plates of the Lusitania were riveted, and as the lifeboats were lowered they dragged on the rivets, which threatened to seriously damage the boats before they landed in the water. Many lifeboats overturned while loading or lowering, spilling passengers into the sea; others were overturned by the ship’s motion when they hit the water. It has been claimed[29] that some boats, due to the negligence of some officers, crashed down onto the deck, crushing other passengers, and sliding down towards the bridge. This has been refuted in various articles and by passenger and crew testimony.[30] Crewmen would lose their grip on the falls—ropes used to lower the lifeboats—while trying to lower the boats into the ocean, and this caused the passengers from the boat to “spill into the sea like rag dolls.”[cite this quote] Others would tip on launch as some panicking people jumped into the boat. Lusitania had 48 lifeboats, more than enough for all the crew and passengers, but only six were successfully lowered, all from the starboard side. A few of her collapsible lifeboats washed off her decks as she sank and provided refuge for many of those in the water. Despite Turner’s efforts to beach the liner and reduce her speed, Lusitania no longer answered the helm. There was panic and disorder on the decks. Schwieger had been observing this through U-20’s periscope, and by 14:25, he dropped the periscope and headed out to sea.[31] Later in the war, Schwieger was killed in action when, as commander of U-88, he was chased by HMS Stonecrop, hit a British mine, and sank on 5 September 1917, north of Terschelling. There were no survivors from U-88’s sinking.