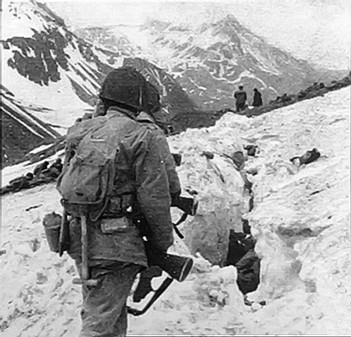 Japan attacked and invaded the United States Alaska islands of Kiska and Attu during World War II.  The Aleutian Islands Campaign was a struggle over the Aleutian Islands, part of Alaska, in the Pacific campaign of World War II starting on June 3, 1942. A small Japanese force occupied the islands of Attu and Kiska, but the remoteness of the islands and the difficulties of weather and terrain meant that it took nearly a year for a large U.S. force to eject them.

On May 11, 1943, the operation to recapture Attu began. Included with the invasion force was a group of scouts recruited from the Alaska Territory, known as Castner’s Cutthroats. A shortage of landing craft, unsuitable beaches, and equipment that failed to operate in the appalling weather made it very difficult to bring any force to bear against the Japanese. Many soldiers suffered from frostbite because essential supplies could not be landed, or having been landed, could not be moved to where they were needed because vehicles would not work on the tundra. The Japanese defenders under Colonel Yasuyo Yamasaki did not contest the landings, but rather dug in on high ground away from the shore. This caused bloody fighting: there were 3,929 U.S. casualties: 580 were killed, 1,148 were injured, 1,200 had severe cold injuries, 614 succumbed to disease, and 318 died of miscellaneous causes, largely Japanese booby traps and friendly fire.  A Japanese American-trained doctor wrote a diary of his time there.

Paul Nobuo Tatsuguchi (辰口 信夫, Tatsuguchi Nobuo?), sometimes mistakenly referred to as Nebu Tatsuguchi (August 31, 1911 – May 30, 1943), was a surgeon in the Imperial Japanese Army (IJA) during World War II. He was killed during the Battle of Attu on Attu Island, Alaska on May 30, 1943.  Tatsuguchi’s diary was recovered by American forces and translated into English. Copies of the translation were widely disseminated and publicized in the US after the battle. The American public was intrigued by a Christian, American-trained doctor serving with Japanese forces on the island and by his apparent participation in assisting with the deaths of wounded Japanese soldiers in his field hospital during the battle’s final days. Translated excerpts from Tatsuguchi’s diary have been widely quoted in Western historical accounts of the battle, especially his final entry in which he recorded a farewell message to his family.