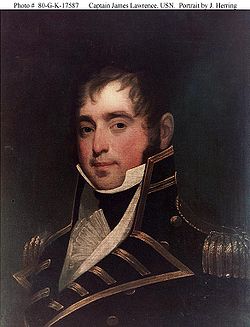 Today in Military History – June 1st – “Dont Give Up The Ship” June 1, 1813 The Navy gets its Battle Cry!  James Lawrence was born in Burlington, New Jersey but raised in Woodbury, New Jersey, the son of John and Martha (Tallman) Lawrence. His mother died when he was an infant and his Loyalist father fled to Canada during the American Revolution, leaving his half-sister to care for him. Though he studied law, he entered the United States Navy as a midshipman in 1798.

Upon his return to the United States in March, Lawrence learned of his promotion to Captain. Two months later he took command of the frigate USS Chesapeake, then preparing for sea at Boston, Massachusetts. He left port on 1 June 1813 and immediately engaged the blockading Royal Navy frigate HMS Shannon in a fierce battle. Although slightly smaller, accurate gunfire from the British ship disabled Chesapeake within the first few minutes. Captain Lawrence, mortally wounded by small arms fire, ordered his officers to “Don’t give up the ship. Fight her till she sinks.”[1] as he was carried below. However, his crew was overwhelmed by a British boarding party shortly afterwards. James Lawrence died of his wounds on 4 June 1813, while Chesapeake was being taken to Halifax, Nova Scotia, by her captors.

He was buried with military honors in Halifax, Nova Scotia, but reinterred at Trinity Church in New York City. He was survived by his wife, Julia (Montaudevert) Lawrence, who lived until 1865, and also a two-year-old daughter, Mary Neill Lawrence. Mary would also become a Navy officer’s wife, marrying Lt. William Preston Griffin in 1838.

Capt. Lawrence’s death was reported to his friend and fellow officer Oliver Hazard Perry, who would order a large blue battle ensign stitched with the phrase “DONT GIVE UP THE SHIP” [sic] in bold white letters. The Perry Flag would fly from his flagship during his victorious engagement against the British on Lake Erie in September, 1813.

This flag is now displayed in Memorial Hall at the United States Naval Academy in Annapolis, MD.