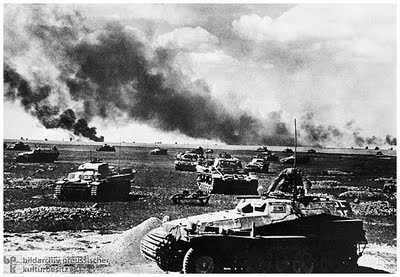 The Soviet attack begins. There are four front-level commands engaged in the operation, under the STAVKA direction of Marshal Zhukov (the southern wing) and Marshal Vasilevsky (the northern wing). From left to right: 1st Belorussian Front (Rokossovsky); 2nd Belorussian Front (Zakharov); 3rd Belorussian Front (Cherniakhovsky); and, 1st Baltic Front (Bagramian). The Soviet combat forces directly engaged in the offensive amount to over 1,250,000 men (in 124 divisions), over 4000 tanks and self-propelled guns, over 24,000 artillery pieces and over 6300 aircraft. Soviet objectives include tactical encirclements at Vitebsk and Bobruisk while a deep encirclement would aim for Minsk. Soviet forces are then to drive west toward the Vistula River. The target of Operation Bagration is German Army Group Center (Busch) holding a salient centered on Minsk, and including most of Belorussia. Its forces, from right to left, include: 9th Army (Jordan), 4th Army (Tippelskirch); and, 3rd Panzer Army (Reinhardt). On the right flank of the army group is the German 2nd Army (Weiss) which is not targeted by the Soviet offensive. The German defenders amount to 800,000 men in 63 divisions with about 900 tanks and assault guns, 10,000 artillery pieces and 1300 planes. Advances of up 11 miles are recorded by Red Army troops of 2nd, 3rd Belorussian and 1st Baltic Fronts. The 1st Belorussian Front does not join in the assault during the day. Meanwhile in the far north, forces of the Soviet 7th Separate Army cross the Svir River.