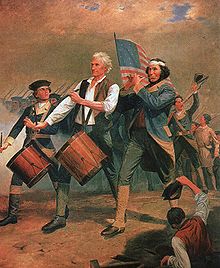 The 4th of July – A Time for Celebration Letter from John Adams to his daughter Abigail on July 5th about the previous day: “In the morning the Delaware frigate, several large gallies, and other continental armed vessels, the Pennsylvania ship and row gallies and guard boats, were all hawled off in the river, and several of them beautifully dressed in the colours of all nations, displayed about upon the masts, yards, and rigging.

At one o’clock the ships were all manned, that is, the men were all ordered aloft, and arranged upon the tops, yards, and shrowds, making a striking appearance-of companies of men drawn up in order, in the air.

Then I went on board the Delaware, with the President and several gentlemen of the Marine Committee, soon after which we were saluted with a discharge of thirteen guns, which was followed by thirteen others, from each other armed vessel in the river; then the gallies followed the fire, and after them the guard boats. Then the President and company returned in the barge to the shore, and were saluted with three cheers, from every ship, galley, and boat in the river. The wharves and shores, were lined with a vast concourse of people, all shouting and huzzaing, in a manner which gave great joy to every friend to this country, and the utmost terror and dismay to every lurking tory.

At three we went to dinner, and were very agreeably entertained with excellent company, good cheer, fine music from the band of Hessians taken at Trenton, and continual vollies between every toast, from a company of soldiers drawn up in Second-street before the city tavern, where we dined. The toasts were in honour of our country, and the heroes who have fallen in their pious efforts to defend her. After this, two troops of light-horse, raised in Maryland, accidentally here in their way to camp, were paraded through Second-street, after them a train of artillery, and then about a thousand infantry, now in this city on their march to camp, from North Carolina. All these marched into the common, where they went through their firings and manoeuvres; but I did not follow them. In the evening, I was walking about the streets for a little fresh air and exercise, and was surprised to find the whole city lighting up their candles at the windows. I walked most of the evening, and I think it was the most splendid illumination I ever saw; a few surly houses were dark; but the lights were very universal. Considering the lateness of the design and the suddenness of the execution, I was amazed at the universal joy and alacrity that was discovered, and at the brilliancy and splendour of every part of this joyful exhibition. I had forgot the ringing of bells all day and evening, and the bonfires in the streets, and the fireworks played off.
Had General Howe been here in disguise, or his master, this show would have given them the heart-ache. I am your affectionate father,
John Adams”