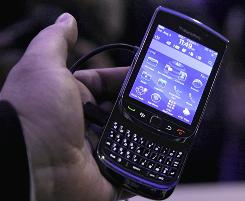 Q: What’s the appeal of Torch?

A: First of all, BlackBerry 6. It’s a complete update of the system, apps, user interface. (And) the combination touch-screen, track-pad navigation and keyboard. It’s evolutionary in the sense if you’re a BlackBerry user, you already know how to use it.

A: The smartphone market continues to grow. Some people are talking how there are 70% or more still using (regular) feature phones. This is an ongoing opportunity.

Q: Where does the business customer fit in?

A: This gives the enterprise customer a device that has the best of all worlds in security, activation, IT wireless policy and management. You don’t have to change your servers, upgrade anything. All the third-party applications you paid for work.

Q: What about games and consumer apps?

A: You’ll find a lot of games for BlackBerry. As more of our devices have accelerometers and touch-screens and track-pad navigation, we’ll see more and more. Carrier billing technology is going to drive game usage. You can try before you buy. You can upgrade to new levels. And you can do that on your bill, where it’s both trusted and convenient. Your Torch app purchase will be on your AT&T bill. Another choice is PayPal, which has been there from the beginning. Or your credit card.

Q: BlackBerry App World has just over 9,000 apps. Apple and Google have a lot more.

A: The advent of the latest Web browser technology means developers can build apps really quickly. The second thing that’s really important is we never factor in the thousands, if not tens of thousands, of enterprise applications written for the BlackBerry. Those are not available in App World. Those are internal corporate apps bought and provisioned through the corporation. This is huge. And the app community itself is growing.

Q: Are you developing a tablet?

A: We’re looking at a whole bunch of spaces. All we do is BlackBerry and mobile wireless technology. So it shouldn’t surprise anybody that we continue to innovate in this space. BlackBerry 6 is a versatile platform.

Q: How important are Tuesday’s announcements to RIM?

Q: What do you have to say about the United Arab Emirates’ crackdown on BlackBerry?

A: This isn’t about BlackBerry. It’s all about what we call strong encryption. If you ban strong encryption in your country, you’re going to cut yourself off from all e-commerce, all banking, all corporate use, all satellite global organizations.

You can ban BlackBerry, but then you have to ban all virtual private networks, all e-commerce, everything that is the lifeblood of commerce.